SEATTLE - Dec. 11, 2013: Redfin (www.redfin.com), the technology-powered real estate brokerage, today released a report finding that winter is the best season to list a home for sale. Redfin analyzed homes listed from March 22, 2011 through March 21, 2013, and found that those listed in winter have a 9 percentage point greater likelihood of selling, sell a week faster, and sell for 1.2 percentage points more relative to list price than homes listed in any other season. 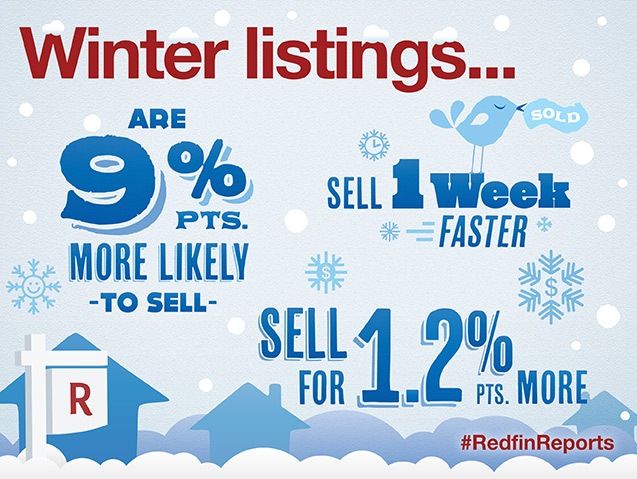 Here's a breakdown of the key selling metrics we looked at:

The data contradicts the popular sentiment that selling a home during winter is more difficult because there are fewer people looking to buy. Further, the advantage of selling a home in winter holds true in temperate climates as well as those with harsh winters. In each of the 19 markets analyzed in this report, including Boston and Chicago, home sellers were better off listing their homes in the winter than during any other season.

Many Home Buyers Hibernate for the Winter, But Serious Shoppers Stick Around

Redfin agents and analysts explain this surprising trend by pointing out that winter home buyers tend to be the most serious, often looking to move because they need to, not because they want to.

"There are plenty of people who need to buy a home in the winter, whether it's because of a job relocation or major family change, like a new baby. These buyers want to get into a home quickly, and are sometimes willing to pay top dollar," said Paul Stone, a Redfin real estate agent in Denver.

An anticipated rise in mortgage rates is another reason why it may be advantageous to list this winter in particular. According to Redfin economist Ellen Haberle, "The Federal Reserve has signaled that it plans to start reining in its stimulus program 'in the coming months,' which will push mortgage rates up. For many buyers, this expected policy change is motivation to strap on their boots and find the right home before rates increase, regardless of the cold weather."

To read the full report, click or paste the following link: http://blog.redfin.com/blog/2013/12/winter-selling.html.

At the following link are Redfin Boston agent Shawn Flynn's six tips for selling your home in winter: http://blog.redfin.com/blog/2013/12/six-tips-for-selling-your-home-this-winter.html.

Redfin (www.redfin.com) is a customer-first real estate brokerage that represents people buying and selling homes. Founded and run by technologists, Redfin has a team of experienced, full-service real estate agents who are advocates, not sales-people, earning customer-satisfaction bonuses, not commissions. Redfin.com features all the broker-listed homes for sale, as well as for-sale-by-owner properties that don't pay brokers a commission. Redfin also offers online tools that make the entire process of buying or selling a home easier and more fun. The company serves major markets across the U.S. and has closed more than $13 billion in home sales. In 2012, Redfin was named one of The DIGITAL 100: World's Most Valuable Private Tech Companies by Business Insider.