, /PRNewswire/ -- (NASDAQ: RDFN) — , and are the most walkable cities in the U.S. in 2020, according to a new ranking from Redfin (www.redfin.com), the technology-powered real estate brokerage. 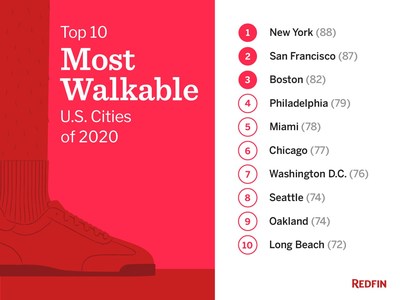 The ranking was determined using data from Walk Score®, a Redfin company that rates the walkability of cities, neighborhoods and addresses. Cities where daily errands do not require a car score 90 points and above, a score of 70 to 89 points means most errands can be accomplished on foot and a score of 50 to 69 indicates that some errands can be completed on foot.

Below is Redfin's latest ranking of the top 10 U.S. cities (with populations of more than 300,000) for walking:

Since Redfin last published Walk Score rankings in 2017, and each lost about 1.5 points, and lost about one, but each retained its place in the rankings.

; ; and , which each picked up around two points, had the biggest Walk Score increases since 2017.

"A lot of my homebuying clients seek out walkable neighborhoods in because it's a way to get a small-town feeling in a big city. In certain neighborhoods, people run into each other all the time because they're out running errands, walking the dog or keeping an eye on neighborhood kids playing outside," said local Redfin agent Costanza Genoese-Zerbi. ", Belmont Shore, , , and , all of which are within walking distance of schools, stores, restaurants and parks, have become more and more popular over the last few years."

, which lost four points to hit 65, saw the biggest Walk Score decline of any U.S. city. It's followed by and , which each dropped three points to 34 and 35, respectively.

For a ranking of the most walkable Canadian cities of 2020, visit: https://www.redfin.com/blog/most-walkable-canadian-cities-2020.

About Redfin
Redfin (www.redfin.com) is a technology-powered real estate brokerage, combining its own full-service agents with modern technology to redefine real estate in the consumer's favor. Founded by software engineers, Redfin has the country's #1 brokerage website and offers a host of online tools to consumers, including the Redfin Estimate, the automated home-value estimate with the industry's lowest published error rate for listed homes. Homebuyers and sellers enjoy a full-service, technology-powered experience from Redfin real estate agents, while saving thousands in commissions. Redfin serves more than 90 major metro areas across the U.S. and . The company has helped customers buy or sell homes worth more than .