January 30, 2019 at 8:00 AM EST
Redfin Migration Report: Migration Trend Reaches a Record High as One in Four People Searching for a Home Looks to Change Metros
Seattle reclaims its migration-destination status while Denver secures its spot on the 'moving out' list

, /PRNewswire/ -- (NASDAQ: RDFN) — Twenty-five percent of home searchers looked to move to another metro area in the fourth quarter of 2018, up from 23 percent the year before, according to a new report from Redfin (www.redfin.com), the next-generation real estate brokerage. The national share of home searchers looking to relocate has been steadily increasing since Redfin began reporting on migration in early 2017 and currently sits at its highest level on record. 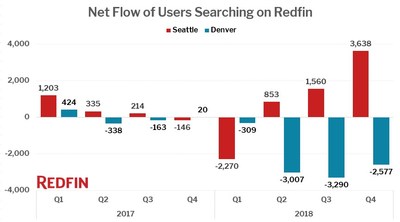 The latest migration analysis is based on a sample of more than 1 million Redfin.com users who searched for homes across 87 metro areas from October through December.

Moving Out – Metros with the Highest Net Outflow of Redfin Users

Outflows on the upswing

In , , and , outflows were up dramatically from a year earlier. Of all residents using Redfin, 24 percent were searching for homes in another metro, up from 19 percent during the same time period a year earlier.

Moving In – Metros with the Highest Net Inflow of Redfin Users

net inflow surged to make it the fifth-most popular migration destination  in the fourth quarter, behind nearby and the relatively affordable metros--, and --that have long dominated this list. Although the number of home sales in was sharply declining at the end of the year (down 22 percent in December), search interest is still high. lack of an income tax may be helping to continue attracting people, as new tax policies enacted just over a year ago favor areas where homebuyers can avoid hitting the SALT cap.

"In both and prices were growing rapidly in 2017 and early 2018 to the point that buyers backed off in the second half of 2018," said Redfin chief economist . "However, people looking to leave high-tax metros for a city with mountain views and top-notch hiking are more likely to pick over because doesn't have an income tax. In fact, the top destination for Denverites looking to leave is ."

In , which has been at number one or number two on the inbound migration list every quarter since our inaugural 2017 report, "the biggest thing is the affordability of homes here, especially compared to markets like the Bay Area," said Redfin agent . "The market has softened in the Bay Area, but not as much yet in , so buyers are moving here to capitalize on their equity and put a substantial down payment or even pay cash."

Redfin (www.redfin.com) is the next-generation real estate brokerage, combining its own full-service agents with modern technology to redefine real estate in the consumer's favor. Founded by software engineers, Redfin has the country's #1 brokerage website and offers a host of online tools to consumers, including the  Redfin Estimate, the automated home-value estimate with the industry's lowest published error rate for listed homes. Homebuyers and sellers enjoy a full-service, technology-powered experience from Redfin real estate agents, while saving thousands in commissions. Redfin serves more than 85 major metro areas across the U.S. The company has closed more than in home sales. For more information or to contact a local Redfin real estate agent, visit www.redfin.com. To learn about housing market trends and download data, visit the . To be added to Redfin's press release distribution list, subscribe here. To view Redfin's press center, click here.