, /PRNewswire/ -- (NASDAQ: RDFN) — Nationwide, 6% of homes that were put up for sale in July held an open house in their first seven days on the market, according to a report from Redfin (www.redfin.com), the technology-powered real estate brokerage. While that marks a rebound from 1% in April, when millions of buyers and sellers across the country were placed under stay-at-home orders, it remains below the 16% level a year ago. 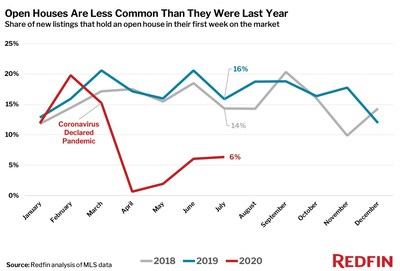 "Housing demand has roared back during the coronavirus pandemic due to record-low mortgage rates, but open houses haven't recovered to the same extent because it's still risky to allow groups of strangers into your home," said Redfin chief economist . "As a result, more homebuyers have been exploring the world of virtual tours and 3D walkthroughs. I predict that even after the pandemic is behind us, many buyers will continue to do the initial part of their home searches online instead of opting for open houses."

The West has seen the slowest recovery, with just 4% of homes listed in July holding open houses during their first week on the market, compared with 29% a year earlier. The Midwest clocked in at 9%, compared with 16% in , while the rate in the Northeast was 12%, versus 20% a year earlier. In the South, 7% of homes listed last month hosted open houses in their first week on the market, just shy of 12% a year prior.

Florida Redfin agent has attended several open houses since they started popping back up across the area in June.

"Open houses are back in , but they're not quite what they used to be," Walsh said. "Today, you walk in the door and you immediately have to sanitize your hands and sign a piece of paper saying you have no coronavirus symptoms and haven't traveled out of the country in the past two weeks. Only three parties are allowed in at a time, and there can't be more than two people in a party. There's usually an extra listing agent there to control the flow of people. Some sellers leave drawers, closets and cabinets half open so you can peek inside without touching."

One reason sellers in have started to host open houses again is they can't keep up with all of the requests they're getting for individual tours, Walsh added.

"Before the pandemic, I was advising sellers against doing open houses because it was a waste of time—we were just getting looky-loos who weren't serious about buying," he said. "But now, demand for showings is through the roof, so open houses can alleviate a lot of stress for sellers. Why do 15 back-to-back showings with individual buyers when you can just host one open house?"

At the same time, the market in is so hot that some sellers may not even need to hold open houses, Walsh explained. If your home is in decent shape and you list it for a reasonable price, it's possible to find a buyer within a matter of days, he said.

Demand for homes has been rising across the country as a result of record-low mortgage rates and an intensifying housing shortage, both of which are fueling competition. In July, more than half of Redfin offers faced bidding wars for the third month in a row.

In some areas of the country, including parts of and , open houses still aren't allowed, Redfin agents said. In , showings are by appointment only, and are commonly booked through an app called ShowingTime, according to local agent .

"It's kind of like making an online reservation for a restaurant, except you only get 15 minutes to see the home, and then the next party comes through," she said. "We're seeing lines out to the sidewalk for the really popular listings."

While the rate at which sellers are hosting open houses has begun to recover in some parts of the country, it may never return to pre-pandemic levels nationwide, as many house hunters have grown accustomed to viewing homes and making offers from the comfort of their couch, according to Fairweather. A July Redfin survey found that nearly half (45%) of people who bought a home in the past year made an offer on a property that they hadn't seen in person, the highest share on record.

Redfin has taken numerous precautions to keep homebuyers and sellers safe during the pandemic. In places where open houses are legally allowed, Redfin is using a queue system to allow only one group from the same household into the home at a time. The company is also requiring all attendees to observe social distancing rules and wear masks. In addition, Redfin is offering private video-chat tours led by Redfin agents, as well as live video open houses.